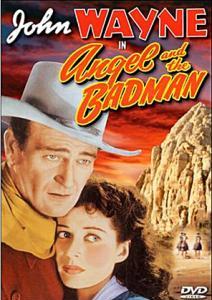 HE LIVED ONLY FOR REVENGE... SHE LIVED ONLY FOR HIS LOVE!
John Wayne. The Duke. One of the most resolute images in cinema history. Regularly dubbed “The Ultimate American”, he became an idol to many for his tough presence and heroic nature onscreen. A big step in building this perception in the eye of the public was when Wayne began acting as a producer on his own films. In this way, he could ensure a greater level of control over his screen image and try to make better, more successful films. Say what you want about the guy’s real-life politics, but he understood the system very well. Today’s film was Wayne’s first foray into producing – Angel and the Badman.
A former deputy turned bad guy, Quirt Evans (John Wayne) winds up in the care of a family of Quakers when they find him shot and near death. When he’s better, the daughter Penelope (Gail Russell) starts to show feelings for him. Taken with the girl and her family, Quirt has to decide if he will return to his old ways or leave the behind in favour of a new life with Penelope.
As I said, this was The Duke’s first crack at producing a film as well as starring. Right from the off, he showed a degree of savvy that he rarely gets credited with. James Edward Grant, a popular pulp novelist of the time, wrote the script for Angel and the Badman and it is some fine work. Its central relationship, on which the premise of the piece hinges, is wonderfully developed. Wayne’s character, the amusingly-named Quirt Evans, is well-drawn as a one-time lawman, deputy to Wyatt Earp no less, whose temperament and love of cheap thrills turned him away from the law and towards a less upstanding lifestyle. Similarly, Penelope Worth, played by Gail Russell, is neither the wallflower nor the tomboyish firecracker of other westerns. She’s not weak, but she’s not an over-bearing annoyance either. She’s a firm individual, garnering a good deal of strength from her family and beliefs, and she’s not shy of being the pursuer of the man she loves. It’s precisely because the characters are so well done (certainly for what is generally a B-grade western) that the relationship is actually quite convincing. Rarely does it feel forced (the pair kiss much earlier than they should, but this is more a necessity of the period than anything else), so it has a very natural flow to it.
Wayne also had Grant direct the picture, which turned out to be another wise move. This would also be Grant’s first time in a new role, and he certainly shows some skill for it. He largely left the actual composition of shots to his cinematographer Archie Stout, who turns in some fine work himself (Russell looks especially radiant), which meant Grant could work with his actors more. He’s got a great sense of pace in the film, which feels properly driven, partly due to the script that he wrote, but also due to his good sense as a director. He also captures some of the more sensitive moments with a form of dignified restraint that, in other pictures of a similar ilk, would have been overblown or drowned by sappy music. There are so many instances when he lets Wayne and Russell communicate in glances and things unsaid. His action sequences are equally well done, showing some fine editing (credit to Harry Keller on that) and some genuinely superb stunt work, particularly in the famous bar fight scene.
In the acting stakes, there’s actually very little to complain about. Those that often lamented the awkwardness of Wayne’s style will find that he’s pretty good here. He’s always had a great command of his own physicality, and he carries himself very well as Evans. His body language, the stoop of his shoulders or the nod of his head, show that even The Duke could hold some subtlety about him. You genuinely see some of the inner conflict in the guy, trying to decide what kind of person he wants to be after having met Penelope. With her and her family, he finds life hard, but very fulfilling. When he tries to go back to his old ways, you can see in his face that he finds these things he used to love now rather hollow. Gail Russell makes a better show, managing to show a great deal more texture in her performance. She’s sweet and lovely and conveys so much with the slightest of glances. It’s really not difficult to see why this Badman fell for this Angel. It would be difficult to really shine from under these two performances, but Harry Carey and Bruce Cabot (as Marshal McClintock and Laredo Stevens respectively) both make enough of an impression to stand out, too.
Some may find the religious aspect of the film maybe a little off-putting, what with Quirt being turned away from the sordid life by a pretty girl with a Good Book, but, to be fair, it is a story of redemption. There are several times when it starts to push the boat out a bit far, with the atheistic Dr. Mangram (Tom Powers) being generally regarded by the Worth family as a little confused in his doubts and Quirt’s friend Randy (Lee Dixon) taking Quirt’s new Bible and, after reading a short passage, declaring it to be some “good writing” and “one book I’m sure gonna read.” This may be a little heavy-handed at times (it’s certainly something I noticed), but it doesn’t ever completely fall into didacticism or flat-out preaching.
Angel and the Badman is great western, with good work on all fronts. The script and direction make it stand out by having an actual story going for it, the stunt work is impressive and the acting is good, particularly from Russell. All in all, it’s good fun and a thoroughly well-made western.
Posted by Paul Costello at 13:25