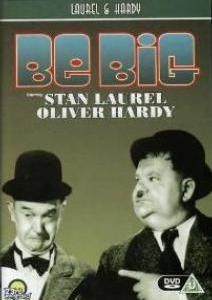 MR. HARDY IS A MAN OF GREAT CARE, CAUTION AND DISCRETION. MR. LAUREL WAS MARRIED, TOO.

Today, we going to be going back into the long, long ago… well, the early 1930s. We’re going to look at a comedy short from the early days of the “talkies” from one of the most legendary comedic duos ever… Laurel & Hardy, classic combination of the skinny Limey and the fat Yank. Though both began as established actors in their own right, they ultimately began officially working together under the roof of Hal Roach’s studio in 1926, where they stayed for 14 years, becoming one of the most beloved comedy treasures that Hollywood has ever given the world. During their time under Roach, they released the film that we look at today - Be Big!

Just about to leave for the train station for a vacation in Atlantic City with their wives, Stanley (Stan Laurel) and Oliver (Oliver Hardy) get a phone call from a fellow lodge member who tells them a surprise stag party is being held in their honour that evening. Initially hesitant because of their plans, they accept and Oliver feigns illness to get out of leaving that day, suggesting Stanley stay to look after him and sending the wives on ahead by themselves. What follows is a series of physical pratfalls as the pair attempt to get ready for their big night.

What’s that rule about comedy? You know, the famous one. The one about how important something is to the telling of a joke. It’s only one word. It’s the key to comedy. Why can’t I remember it? Well, I suppose I shouldn’t feel too bad about not remembering that one rule, since it seems that Laurel & Hardy and most other people involved in Be Big! had forgotten it, too. There’s something ver-TIMING! That’s it! The most important thing in comedy is timing! Thank God, that would have annoyed me for a long while. Anyway, what was I saying? Oh right…

There’s something very laborious about this venture from the guys in the bowler hats, like they're just going through the motions because it's time to make another film. The premise itself is actually a pretty decent set-up for physical gaffs and energetic clumsiness. Two guys want to go to a party with their friends, but have already made plans with their wives. As such, they invent some scheme whereby they can get out of the plans they already have and do what they want, all without their respective spouses being any the wiser. Let’s be honest, it smacks of crazy shenanigans, which is exactly what Laurel & Hardy were all about.

And probably the best thing going for the film was the general conceit that gives the film its title. As Olly himself says, "No man is bigger than the excuses he makes to his wife. So... Be Big." It all ties to that idea that in order to have a successful marriage (read as: fool their wives and get away with their scheme), they need to lie… a lot. This idea is actually a pretty common one: if you make up a lie, the smaller and more convincing it sounds, the less likely it is that people will believe it. As such, the best way to go is to have an excuse be so big and ridiculous and implausible that it would have to be true, so they would have to believe it. One guesses that this idea has been of greater use to comedy writers over the years than people who actually are trying to lie effectively. I actually remember this idea being the basis behind an episode of Cheers ("Let Sleeping Drakes Lie") involving Norm, Tom Skerritt and a swarm of bees. And to be honest, Cheers did it better.

What really gets in the way of Be Big! being good is the incredibly clumsy way in which the central conceit has been handled, and it’s all down to a combination of bad direction, poor timing and simply not knowing what to do with that idea. The film itself is just under a half hour long, around 27 minutes or so. I’m not kidding when I say that around 12 of those minutes are given over to one single joke: the pair accidentally put the other’s boots on, Oliver becomes stuck in Stan's boots and they try to get them off… almost half of the film’s duration sees the two clumsily, awkwardly, utterly failing to free old Olly from these boots. He tries pulling them off himself, Stan tries to pull them off, they try using a bootjack, they try using brute force, all without success. In doing so, they break a chair, a mirror, some curtains, Olly sits on a nail, and they each get their foot caught in the other’s sweater. This may sound all zany and the like, but it feels like it goes on forever. I understand they’re going for the hilarious notion of so much bother caused by such a simple task, as is the mainstay of physical comedy, but it’s just tiresome. And it’s all just basically one joke, repeated over and over and over and over again. It constantly aims for silly and hits stupid almost every time instead. As an example, there is a moment when Olly tries to explain to Stan just how simple this process should be. He has Stan put on one of his (that is, Olly’s) boots just so he can take it off and show the ease with which they should be able to the same for Olly. However, this is just kind of ridiculous considering we know the boot will come off Stan’s foot easier because it’s too big for him. In fact, we previously saw him literally jump out of one earlier, so this whole bit is just nonsense. And yes, I know that part of their dynamic was that Olly would try to explain to Stan how simple some things should be with disastrous consequences, but that doesn’t mean it always works.

Another problem comes from a trademark of both men: Olly’s looking into the camera with consternation; and Stan’s looking awkwardly confused. They, of course, do this several times throughout the film, but all it does here is get in the way, stretching out the gaps in action and killing what little momentum they managed to build. If the film were better paced, or the physical gaffs were better, these moments would add to the moment, as they do with the pair's other movies. Directors Horne and Parrott really drop the ball in this instance since there was a way of bridging the gaps between these gags without constantly stopping things. When the wives arrive at the train station, they find out they’ve just missed their train and there won’t be another one until tomorrow. As such, they get back in their taxi and head home, saying how they can’t wait to see the look on their husbands’ faces. That’s the last time we see them until the end. We could have cut back to them, just once or twice, showing their progress, maybe giving them an obstacle to draw out the journey a little, just to build a bit of tension and allowing quicker set-ups between Olly and Stan’s boot-pulling attempts.

Of course, it’s all well and good me saying this 80 years after the fact. Besides, there would have been some constraints to deal with, the biggest of which likely being a reluctance to cut away from Laurel & Hardy, who were the stars of the picture and the thing people wanted to see. It’s doesn’t really excuse the problems, but does at least explain some of them. The fact that they have only one comedy idea for the whole film which just gets repeated again and again is the thing that remains without explanation or excuse.

Be Big! isn’t really one of the pair’s better efforts and not a good place to start for those new to Laurel and Hardy, mostly just feeling inane thanks to flat direction, rather choppy editing and what feels like a complete lack of ideas given the golden ticket of the titular idea. Given that almost half of the film’s running time is taken up with a single extended gag, which runs out of steam very quickly, it would seem that this film was made as a piece of filler rather than anything that was meant to last. Had the film been half as long, it would likely have been greatly improved. As it is, it’s a rather untoward bump in the golden comedy road for the duo.
Posted by Paul Costello at 03:57