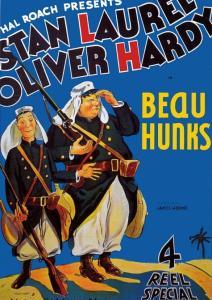 We return to early days, the year 1931 to be specific, for another look at a film from comedy legends Laurel & Hardy. As you may (or may not remember), the only time we’ve looked at a film from this pairing before, Be Big!, turned out to be something of a damp squib… in my opinion. Timing was off, ideas were short, and laughs were, as a result, thin on the ground. Well, today’s venture sees us looking over a film the pair produced in the same period/year, still working under contract with Hal Roach. Fortunately, there seems to be a bit more potential in the set-up for this one. This is Beau Hunks (also known as Beau Chumps).

Ollie (Oliver Hardy) is in love, smitten, all aflutter with feelings of amore. He informs his friend Stanley (Stan Laurel) of his plans to be married to his sweetheart, Jeanie Weenie. However, within minutes of this announcement, he receives a letter informing him that the relationship is over. Heartbroken and disillusioned, Ollie decides to join the French Foreign Legion to forget his heartbreak, and he’s bringing Stanley with him. Once there, though, in the harsh arid heat of the desert, the pair very quickly find themselves in over their heads.

There should be an immediate moment of recognition with this film for anyone who is familiar with Laurel & Hardy, even if they’ve never seen any of their films. There are effectively three (arguably four) images of the comedic duo that have become somewhat iconic for them. One is them in their classic garb of suits and bowler hats; one is them dressed in police uniforms; and the third is Ollie & Stan dressed as a pair of soldiers in the Foreign Legion (in case you’re wondering, the fourth would be them as hobos). You’d certainly think that the film that presented the world with this image would be worth the watch, and not just some kind of excuse to put them in a funny costume. Well, it was, but that can work out quite well sometimes.

And fortunately enough, it worked. Beau Hunks is a solid outing from the pair, with a good pace, good gags and a pretty good story that runs through the whole to keep things moving. Sure, perhaps some may consider it a bit of a leap that a guy would go off to an inhospitable foreign land to serve out the rest of his days as a soldier for an army he can’t leave all because he was so heartbroken… but then it’s not really too much of a leap given the context. Hollywood movies relied on the idea of the French Foreign Legion being populated by men of desperation, the troubled ones, the wronged ones, and they made a great use of it. This is kind of a spill-over from literature, predominantly the novel Beau Geste, where this film gets its title. Besides, even if you do find it somewhat difficult, it’s a Laurel & Hardy comedy from the early 1930s, which puts it not too far above a Bugs Bunny cartoon. We can give them some leeway for shenanigans.

And the set-up is handled very well, and gives them some pretty good gags. Even moments separate from the plotting are a fine trove of visual gags, callbacks and physical gaffs, which come off much better here than they did in Be Big! because they don’t feel like they’ve been stretched out past breaking point. The opening few minutes of this film has a much better hit ratio. Aside from showing off Ollie’s actually rather sweet singing voice as he serenades (from afar) his loved one, Jeanie, Stan accidentally cuts a square of fabric out of the seat of armchair, and tries to cover it up. After Ollie finishes his song and confesses his intentions to marry, Stan says he doesn’t believe him, asking who would marry Ollie. His answer, “A woman, of course. Have you ever heard of someone marrying a man?” Stan says he has. A little surprised, Ollie asks who. Without missing a beat, Stan replies, “My sister.” Classic.

Once the pair arrive at the fort of the Foreign Legion, things start to get under way. Stan flubs the roll call, they both get on the wrong side of the commanding officer (who they constantly refer to as a different rank every time they address him), and Ollie discovers a truth about his beloved Jeanie Weenie. From the beginning, Ollie has clutched a picture of his true love close to his heart, and it’s only in this picture that we ever see her… it’s an autographed picture of Jean Harlow. When they arrive at the barracks, whilst Ollie looks forlornly at her image, Stan looks around the other new recruits, and every one of them is also tearfully clutching an autographed picture of Jean Harlow. So, it turns out that Ollie has perhaps had nothing more than an unrequited crush on a beautiful movie star, literally just like everyone else. That he received a letter from her breaking off their relationship seems to be neither here nor there, since, it would seem, so did every other guy. This theme then becomes one of the better running gags of the film.

The direction of Beau Hunks actually feels stronger, more visually coherent thanks to director James W. Horne (on viewing this, we would have to surmise that Parrott was the one responsible for the directorial flatness on Be Big!). The first time we find ourselves introduced to the communal sleeping quarters of the new recruits, we see it through an extended rifle rack, presenting an apparent image of these men being behind bars… made of guns. That’s a pretty strong and striking image of the world our pair now find themselves in, where these men are now effectively trapped in a life of military servitude from which there is no escape. When you think about it, that’s kind of a harsh image to put in a Laurel & Hardy comedy. Later, as the troop are marching in the desert, on their way to their first real assignment, we get what is basically handheld camerawork, with the camera bobbing and shaking in front of out intrepid duo, marching along with them and heightening the difficulty of their effort. And this was in 1931, before the camera advances that came from World War II news reporting made such manoeuvres less cumbersome. Visually, Beau Hunks is a kind of a treat.

There may be some issue with Beau Hunks as concerns the depiction of Arabs in the film, being that they are the villains of the piece, all barefoot and Allah-praising. That said, I’m not entirely sure how much of a problem it really is. They aren’t actually as hideously stereotyped as they could have been, certainly when considering the time period of the film. Nor are they overly evil, or regarded as any kind of godless heathens or savages. They are painted pretty broadly as simple bad guys for our heroes to fight. Bad guys that would, given the temporal and geographical setting, would make sense to use. It’s probably not good that they would have been just straight up used as the bad guys, nor is it necessarily the best defence to say that they aren’t as badly portrayed as they could have been, but they aren’t really demonised, either. It’s perhaps just a point of note.

Again, speaking from a personal perspective, there are some moments where I think a couple of jokes go on a bit long, the one that springs instantly to mind is when Stan gets his rifle caught in Ollie’s belt and can’t get it loose. However, that’s kind of just getting picky at this point. Plus, that’s just my own personal taste.

Beau Hunks is a good and worthy use of the comedic talents of Laurel & Hardy, showcasing some of their best skills in a variety of comedy disciplines, not to mention being a fine show for the acting and singing talents of Oliver Hardy. On top of that, it offers some surprisingly deft use of camerawork and visual metaphor that you wouldn’t necessarily equate with this kind of picture, particularly for its time, thanks to Horne. Beau Hunks may in fact be the longest Laurel & Hardy film, but it’s certainly up there with their best.

Excellent. Good to find the guys back in a good place for me.
Posted by Paul Costello at 04:09