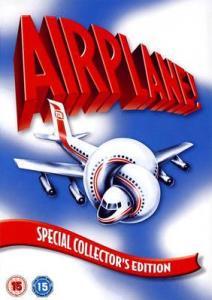 YOU'VE READ THE AD, NOW SEE THE MOVIE!
People love comedies. They love to laugh, and there are just so many ways to do it. It can be the most sophisticated of witticisms or it can be the most basic of pratfalls. You can build a joke like a chemistry experiment, out of subtle individuals elements, each one harmless on their own, but mixed together and delivered right, it produces a cracker of a punch line. You can also use the simplest, most common of physical goofs, like slipping on a banana peel. They can be as understated as a quick throwaway gag about oral sex, or they can be as abrupt as a pie in the face. There are even jokes that are funny precisely because they’re not meant to be, they’re played so seriously. Little wonder then that one of the most commonly named nominees for Funniest Film Ever is the 1980 classic Airplane!, because it hits every single one of them.
When the flight crew of an airplane becomes ill with food poisoning, it’s up to one man to take control and save the day – former air force pilot, Ted Striker (Robert Hays). Problem is that Striker now has the world’s most literal drinking problem and has been afraid to fly since… the war.
It was back in the 1970s in Wisconsin that brothers Jerry and David Zucker first met Jim Abrahams and started the Kentucky Fried Theatre Company, a comedy sketch outfit that specialised in doing spoofs of adverts they saw on television. They simply watched all of the bad commercials and just spun material out by adding jokes in wherever they could. At some point, the three saw the 1957 disaster movie Zero Hour! and immediately recognised the near limitless potential for comedy in the story. They actually bought the rights to the script for two reasons: 1) They would be free to use whole scenes verbatim; and 2) No one would sue for copyright. From the simple story of a former pilot whose nerves were shot being forced to land a plane after its crew became ill, the three created a comedic monster with a cyclic rate of jokes to rival a Howitzer.
There is almost no point in the film where they are not being funny. Even the straight-faced moments are brimming with a nudge-nudge, wink-wink approach to the audience that renders them weirdly hysterical. It should be said that the cast themselves (almost) never play directly for laughs. They know it’s funny, and they know we know it’s funny, but they never give a hint of that recognition onscreen. It’s one of the great triumphs of the picture. The performances are so earnestly straight, the delivery so deadpan that you’d almost believe that they’re trying to make a serious picture, but the directors won’t let them. This notion is made even better by the fact that the cast was scattered with people who had never done comedy before… ever. Robert Stack was a TV tough guy, famous for playing Eliot Ness in the television series The Untouchables, but his macho bravado and stern manner of speaking ends up as a wry send-up of that kind of character. Lloyd Bridges was a well-respected dramatic actor in television and film, and was even unsure about taking the role until his sons Beau and Jeff convinced him to do it. Leslie Neilsen was a Hollywood leading man who had started to decline in his career due to his age and he was grateful for the chance to try something new. Both Bridges and Neilsen were without any known gift for comedy before this film, but now their names are synonymous with parody comedy. Think about that – without Airplane!, there would be no Police Squad or The Naked Gun or Hot Shots. That was the impact of this movie.
The lead romantic pair of Robert Hays and Julie Hagerty (this was her first film) also do so well together that amidst the rapid fire of jokes, you get totally sucked in by the sweetness of their relationship. It’s tough to make any kind of impact beyond what’s funny in a movie like this, particularly when that storyline is really just an excuse for more comedy, but they do it wonderfully.
Over and over again, Airplane! does the thing that lies at the heart of great comedy – it sets the audience up with one particular expectation, and then spins it completely around for a superb payoff. Everything about this film has such a manic, gleeful energy to it. Every tool of comedy is used, from physical gaffs to spit-takes to word play to sight gags, and with a dexterity that is frankly staggering, and there is nothing that isn’t attempted for the sake of comedy. No subject that isn’t touched upon, no taboo that isn’t skirted. In amongst the jokes about harmless stuff like smoking tickets and sandwiches, there are jokes that are about abortion, death, paedophilia, bestiality, substance abuse, race, religion, poop… hell, you see a guy get stabbed onscreen, and it’s never not funny. What other film has gotten away with it because everyone is too busy laughing at it? That alone is worth the viewing.
Airplane! really is one of the funniest films ever made. It’s got a joke count so high and of such variety that it’s truly something to behold. It’s clever, satirical, cruel, immature, deapan and fires so quickly that it’s possible to miss whole scenes because you were too busy laughing at the last one. This was the beginning of so much in the world of comedy that it’s difficult to imagine where we would be without it.
Posted by Paul Costello at 04:04