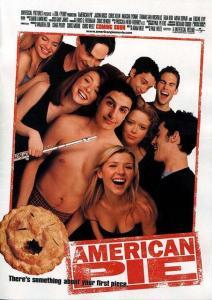 THERE'S SOMETHING ABOUT YOUR FIRST PIECE
Teen movies were big in the 80s. They became big business because of films like Fast Times at Ridgemont High and pretty anything John Hughes made. At some amidst this, a sub-genre took a spike as some filmmakers wanted to focus more on a specific aspect of teenage life – Sex: The Quest to Get Laid. This was an element present in Hughes films and Fast Times, but it was only part of them. Lesser titles were pretty much just cheap T&A flicks set to titillate, but in the end were rather disposable. Stuff like Private School, Losin’ It, Valley Girls, Hamburger: The Motion Picture or the more lasting Porky’s. At some point, maybe because of the whole AIDS scare thing, sex took a bit of step back from the teen flick. However, by the later portion of the 90s, the tradition was revived, assembling an attractive young cast and seeing what hormonal hi-jinx they got up to, with the film American Pie.
Jim (Jason Biggs), Oz (Chris Klein), Finch (Eddie Kaye Thomas) and Kevin (Thomas Ian Nicholas) are four friends who make a pact that, before they graduate high school, they will all lose their virginity, with prom being the deadline for them to reach their goal.
The script by Adam Herz, his first, is clearly a rather fond throwback to the likes of Porky’s (Herz wrote his dissertation on Porky’s in university). As such, it’s really more of a collection of gross or awkward scenes. Not that there’s no story. There is, although it does feel somewhat episodic because of the focus on the Pale Ale scene or the Stripping scene or the Pooping scene. These scenes are quite pronounced and they are the thing you’ll remember long after the film ends, but they’re used as part of a trade-off with the audience. The scenes of gross-out humour are what bring the youngsters in, but the reason it wants to talk to them at all is to talk about sex.
What separates American Pie from other sex comedies aimed at young folk, like Porky’s or Slackers or even National Lampoon’s Animal House, is the frank and actually rather considered approach to the character’s attitudes towards sex. Yes, they talk about it a lot and can’t wait to do it, and the film takes great fun in dragging out their hormonal exploits, but there is some actual growth in these characters. Towards the end, they begin to consider the idea that being in a rush to lose their virginity may not be as high priority as they think. And even if they do, it’s still no one’s business but their own. Pressure to get it done, whether from friends or yourself, will just end up making you hate sex before you even have it. There’s also genuine conversation about love vs. lust, which goes beyond just the tokenism displayed in other teen comedies.
Further to this careful discussion, American Pie holds a cast of really rather well drawn characters, defined from each other and all holding some aspect of familiarity with the audience. In your school years, you know people like Jim or Stifler or Michelle. That we are already so familiar with these types of people means that the message of the film is presented in a far more approachable manner. It wouldn’t work if the characters were too abstract or too flat. They do seem real and so their thoughts and feelings do, too. What’s actually very refreshing for this type of film is the care taken with the female characters. So often are they nothing more than The Goal, and so tend to be one-dimensional and unrelatable. In American Pie, the girls are just as confused by their hormones as the guys, they just handle it a bit better. None of the girls in our immediate range are bitchy or dumb or a target for our spite. No one is. Even a dick like Stifler is still strangely likable.
The cast all pull their weight admirably. Jason Biggs is a great nervous presence as Jim (and Eugene Levy is superb as his lovable, repressed dad); Seann William Scott simply is Stifler; Natasha Lyonne’s Jessica is great; and Alyson Hannigan steals the whole film with a performance carefully controlled and geared towards a single line of dialogue. Even Tara Reid is good.
American Pie is a deceptively sweet film, which nimbly offers the standard gross-out gags along with a surprisingly mature perspective on sex as relates to teenagers. The premise is sufficiently simple to allow an easy flow of humour, the characters are defined and the performances are good all round. The franchise may have been somewhat devalued by the subsequent straight-to-DVD sequels, but the first time out is certainly worth the watch.
Posted by Paul Costello at 03:06