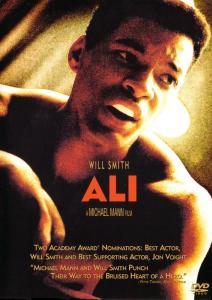 FORGET WHAT YOU THINK YOU KNOW
Muhammad Ali is already a pretty familiar subject in the movie world. In 1996, the documentary When We Were Kings took a look at legendary bout between Ali and George Foreman fight, the Rumble in the Jungle; the 1970 documentary A.k.a. Cassius Clay looked at his career up to that point; two 2000 TV movies, King of the World and Ali: An American Hero… Muhammad Ali actually even played himself in the 1977 biography The Greatest. The real big screen treatment was the 2001 Michael Mann film, Ali.
We follow Muhammad Ali (Will Smith) from 1964 to 1974, from becoming champion, through converting to Islam, refusal to fight in Vietnam, being stripped of his title, facing a five-year prison sentence, two marriages and winning back his crown.
As a biographical film, there should be two concerns at the heart of the project: teach you about the character; and make you care about them. Ali certainly succeeds in the first part of this goal, but struggles with the second. Ali’s story is huge, expansive, complex and filled with controversy and charm. As such, the filmmakers didn’t seem to want to leave anything out. Rather than follow the man himself constantly, there is a lot of focus given to the period and other big figures that feature. Admirable, but fraught with pitfalls. On one side, by taking in all of the various elements that went towards making the man, you get a greater sense of his place in the world and the things he had to fight against to become the man he was. On the other hand, there is a degree of distance that is created between the viewer and the subject, which hurts the overall venture in the long run. For the first hour of the picture, we seem to be developing more of a connection with Malcolm X, until his assassination. After that, the camera seems to settle a little more on Ali. Clearly, the decision was made to try and make the audience empathise with Ali by trying to make them be as affected by things as him, rather than through him like some sort of emotional conduit. However, this does somewhat cheapen the project as a biopic, undercutting the stature of the man and the efforts of the actor playing him.
Michael Mann’s direction is, frankly, a little hit and miss, too. His quasi-documentary approach adds a better texture to the picture, but invariably keeps us from being involved in the story as much as you know you should. There are moments of real magic on screen - Smith’s scenes with Jon Voight positively glow with warmth - but it’s not all smooth sailing. The fight scenes, though handled with a great visceral sensibility, feel lacking in emotional punch. Another problem in the film comes from simply having too much material to work with. Events and figures in Muhammad Ali’s story are so huge, so important, that trying to cover them all can make the whole feel rather flabby. There are entire subplots that could have been comfortably excised without much detriment to the film, such as Ali’s first marriage to Sonji Roi, played by Will Smith’s real wife, Jada Pinkett Smith. It may be important to the man, but it’s not really to the audience. We simply don't feel the depth of this importance. We’ve seen documentaries on the man, but this is a dramatic work. We should be much more focused than this. Overloading with characters and storylines can only take our attention away from the man that gives the film its title and central focus. Weirdly, it leaves Ali fighting for control of his own picture.
Will Smith does a fine job in the lead role. It’s not altogether flawless, but I lay this more at the feet of the script and direction than the efforts of the actor. Smith capably handles Ali’s confident bluster and his rhythm of speaking, as well as the physical prowess of the famous pugilist thanks to Smith adding 35 pounds to his frame. Smith tries for subtlety in Ali’s quieter moments, but is generally eclipsed by others with more standout parts. Jon Voight is utterly unrecognisable under prosthetics, but he gives an equally immersive performance as sports journalist Howard Cosell. The scenes between the two are a true gem. With them, you can feel the respect and fondness, the importance, in their relationship. Mario Van Peebles’ performance as Malcolm X is also rock solid, and Jamie Foxx seems to be able to carry an entire arc in very little screen time.
Ali is a good biopic of a very interesting man, though it does fall short of being great. The script and direction, though wonderfully filled with details and odd moments, are too laden with characters and stories to allow to the film to be as focused as it could be. The acting, though, is of a great standard and Will Smith ably carries his weight in the lead. It does a great job of evoking period, but ultimately feels a little too emotionally distant for us to really care as much as we know they want us to.
Posted by Paul Costello at 13:28